‘A night of action on renewables’ shows keen community interest 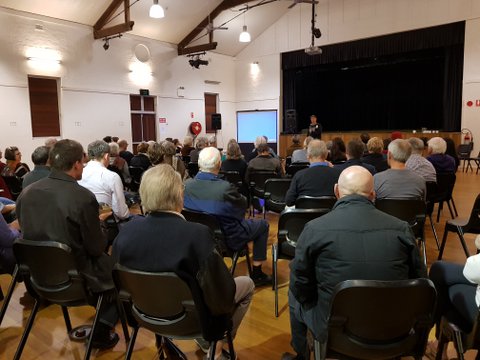 Zero Emissions Byron hosted a ‘Night of Action on Renewables’ on August 31st, with an audience of more than 80 people who were all keenly interested in how we can develop renewables in our community.

Keynote speaker Taryn Lane, a manager of Hepburn Wind, Australia’s first community-owned cooperative windfarm in Victoria, provided details of how local communities around the world are working together to reduce their emissions through community investment in large scale renewable projects. Taryn was just back from an inspiring three-month Churchill Fellowship taking her to zero-net regions all around Europe, and was able to bring home many working examples of what we can create here in our region. “Many communities globally have already paved the way for us to follow,” she said. “Communities can secure their own renewable pipeline to 100%. They can own it locally and benefit from it. Having local government leadership is pivotal to this.”

Dan Fitzgerald, from Small Giants, described the company’s investment policy of “using business as a major tool for positive social and environmental impact”. The company is keen to provide initial funding for the development of large scale solar PV projects in Byron Shire as a way for the Shire to reach its emissions reduction target. How members of the community could invest in these projects was outlined.

COREM’s Dr Rob Passey described the opportunity and the many challenges faced in attempting to resurrect the production of hydro electric power at Laverty’s Gap outside Mullumbimby.

The following day, an ‘Action Tank’ was held in Byron Council, aiming to get clear and specific about how large scale renewable projects can be constructed in the Shire within the next 24 months. Key players – from Essential Energy, local investors and relevant providers, through to the Clean Energy Finance Corporation discussed the key elements of getting community owned renewables up and running – land; investment and finance; models for community ownership; and community engagement.